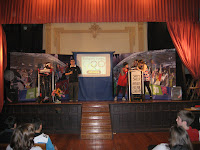 This Monday  (December 10th) we went to the theatre. We arrived late and we only watch the final part of the performance. Theperformance told about London Olympics games. It was an interactive performance. The actors caught diferent espectators and they do theatre with them. We watched different parts: First we watched athletics game. Then they swam in a pool and finally the presenters fell in love.

In my opinion the performance was interesting because I understood the English that they used.
UXUE OTEGI (2ºB) 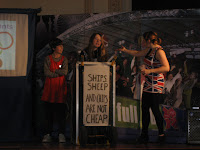 Yesterday, 10th December, we went to see a play, 3D Evolution. It was about the Olimpic Games in London, and a presenter, Bob, want to see it on the computer, but it’s broken and a computer technician goes to fix it.

My opinion is that it was very funny because some children of my class participated, but it was more boring than last year. 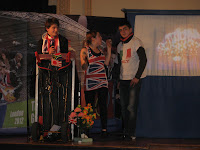 Yesterday, 10th December, we went to see an English play. Its name was 3D Evolution.

I liked it because it was very enjoyable and funny, but I didn’t like it in part because I was in the public and they took me to do sports, and I did not like that; but I know that it was funny for the rest…
ENARA IGLESIAS (2ºC)